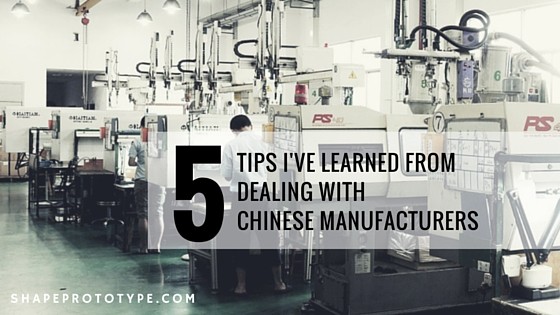 Lessons from my personal experiences

There are many questions like this in recent years — Is China’s status as the ‘’world’s factory’’ is coming to an end? as other emerging economies offering cheaper labour and rising wages dull China’s competitive edge. In fact, the availability of large labour market is just one of the many factors that have made China a manufacturing hub. The business ecosystem in China has evolved quite a lot in the last thirty years. For example, Shenzhen, a city bordering Hong Kong in the south-east, has evolved as a hub for the electronics industry. It has a cultivated an ecosystem to support the manufacturing supply chain, including component manufacturers, low-cost workers, a technical workforce, assembly suppliers and customers. Without a doubt, there are still a huge number of products made in China, which in reality still put China as the world’s factory among many industries.

All these appealing factors attract western companies from startups to Fortune 500 touching down in China. They either look for partnership or ODM opportunities or select a few contract manufacturers and work together. The process sounds very straightforward when it comes to finding a partner in the business. In reality, there are many stories we have heard with regard to how the businesses cannot work due to the issue from Chinese manufacturers. An Australian footwear brand Bennetts Boots failed to deliver quality products after moving its production lines to China, that has cost the company to shut down. Product quality issue, production delayed, misunderstanding in delivering services, all these issues could significantly cause major fatal failures in manufacturing, or possibly the whole business.

Not only language barriers causing miscommunication, we’ve all heard the culture difference is one of the major factors as to why western brands or companies failed in China. The whole culture difference thing is the very complicated topic as it relates to business culture, consumer culture, communication method, the ‘guaxi’ network etc. It involves political, sociological and educational, all sorts of elements to form today’s Chinese culture. It’s a deep subject to learn. To truly understand it can take a few year time’s experiences and integration to know simply the fraction of it.

A few years ago, as a young professional, I came to Pearl River Delta area, China, the region was considered as the world’s largest density of manufacturers, as well as relatively richer areas in China due to its increasing number of job opportunities in the manufacturing industry. Growing up in the city in Taiwan and later studying and working in the UK, I had never been to mainland China, never imagined experiencing the so-called ‘’world’s factory’’. The first few weeks were difficult. Not only could I not get used to the polluted air, all the landscape presented in front of me are these same type of height/design building rolling one block after another. You can see factory operators wearing the same shirts playing pool in the middle of the road or crouching side by side on the street while smoking. The roads are dusty all the time and the overall infrastructure is very poor. To me it was totally out of my comfort zone considering I just moved from more of a civilisation world where the air is a lot nicer and more a constructed community.

However, though, I wouldn’t be surprised if someone told me that 70% of the commodity in the world were made 70km within this area. And this is something that amazed me the most. I was ready to give it a try to see what inspiration will come up. I was working as a project management role where I spoke to the client in the US on a daily basis. In the meanwhile co-ordinate with in-house factory staff and outsourcing suppliers to ensure each project is on track.

The funny thing is, although my native language is Mandarin, sometimes I found it harder to communicate with Chinese manufacturer side than my clients in the US, and I was aware that this has nothing to do with the language. It’s the culture thing.

Over the past few years’ experiences in dealing with Chinese suppliers/manufacturers, I have learned how to proceed things faster and more accurately with them when it comes to doing business together. Also, as a Taiwanese, sharing a commonly spoken language help realise quickly what’s on earth so different when working with Chinese people.

Always be skeptical when your Chinese suppliers told you they understand what you mean, especially when talking about some details that really matter.

As they just want to be nice not to ask you too many questions, even when they can’t fully understand. The reason behind it can be traced down to the education system. Unlike Western culture, as school kids, you might be encouraged to always ask questions when you do not understand. In Chinese culture, they were told what to learn, what not to. If asking questions, your peers may laugh at you because you don’t understand things. Therefore, a lot of conventional Chinese way of dealing with things just says ‘yes’ ‘yes’ but if it really means anything to them? only themselves know.

When you, as a client, speak with Chinese suppliers be aware to use Chinese Manner.

It’s an interesting cultural thing. You might have heard that Chinese people are in general lack of common manners, compared to other countries around the world. The same phenomenon can also be found when doing business. The whole point is, if you are their client, then just act like you are their boss. Some manners can be omitted in this way, given that they did things in an inappropriate way.

In western culture, we thought that every role in the business deserving being treated with respect, which we would do the same to Chinese suppliers. However, you might find that the kinder you treated with them, the more ignorant/ less serious they can be towards your business. It’s expectable to give them lessons when things go wrong, if they value your business relationship, you can tell the differences.

So there you go, the art of finding a balance between acting like their boss (actually, a client), and a friend-friend could be a key to the relationship.

Just so you are aware — for some, this is their way of thinking, so be alert!

Chris O’Halloran, an International business expert from Australia, who helps Australian businesses navigate their way through the process of manufacturing in China, says:

“The Chinese do business by going in cheap and then try to recover margins by cutting corners, hoping no one notices. To the Chinese, if it looks the same to them, then it is the same. They’re not trying to be nasty; it’s just the way they do business,”

“Success to the Chinese is being able to do things behind your back and get away with it. I don’t mean that in a derogatory way; it’s a cultural thing’’.

She realised just before her business failed in Chinese manufacturing.

From the start, you have NO reason not to believe in you Chinese manufacturer.

Many of these shocking stories and experiences out there talking about how bad quality Chinese-made products could be, which undoubtedly made us uncertain about manufacturing in China and have little faith in them. While negative stories going on and on, there are definitely more incentives over disadvantages when it comes to made-in-China, such as low-cost, extensive sourcing network, strategical geography located, and comprehensive business supply chains. Undeniably China is still the top place in the world to produce world-class products, from phones to shoes to everything surrounded.

Before deciding a Chinese business partner, speaking to them over Skype, if you are overseas, to understand more about each party and have a healthy relationship from the start. Working with Chinese manufacturer can be one of the best experiences you ever had just because it’s challenging and exciting to deal with.

Now it’s your turn! Welcome to comment and exchange your experiences in dealing with Chinese suppliers and manufacturers.

Notes: The article is based on a few individuals’ personal experiences which can not be considered as general knowledge.

We support The Great Bay Area startup ecosystem, whether you are a startup, designer, accelerator, incubator, advisor, investors or media,  welcome to get it touch!

Arrange a free call and find out how we can assist.

Shape Prototype is a hardware product studio based in Taiwan, with product manufacturing function located in Shenzhen, China. Our goal is to support hardware and IoT startups & SMEs worldwide by providing cost-effective solutions, shortening the manufacturing process, from prototyping, rapid tooling, and high volume production. Contact us today and discover a better way to achieve your manufacturing goal.