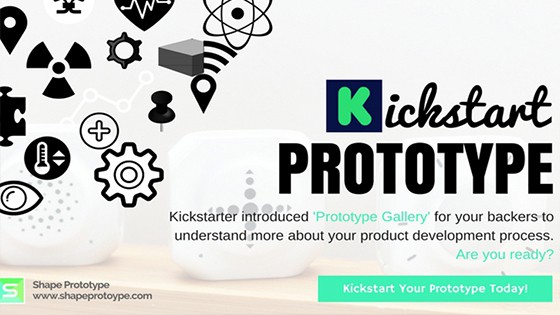 Many backers must have noticed that on some of the tech | design product campaign, there is a new ‘Prototype Gallery’ feature just under the main banner where a reader cannot miss.

This can definitely increase the involvement between the backers and creators, adding some more sensational attachments to. By browsing the prototype images, the backers know more about how the concept of the idea is developed, how the product development goes, and the efforts the creator team made thus far.

According to Kickstarter, the type of prototype is categorized into 4 different stages.

Always identify what’s to achieve before making any prototypes

A functional prototype is not always fancy. It is normally built with the most cost-effective way, in this sense, 3D printing is a very good process to making it. Although it may not be sound to show as a prototype it is a really great behind-the-scene source for your backers. Everyone likes to hear stories, and everyone enjoys the stories of a great creation does not just come so great at the beginning. Just like we always like to dig in the images of how Apple and Google started from a garage.

Appearance prototypes are made for mostly demo purpose. Nowadays technology is changing faster than we think. It is important for a startup to work on every aspect of business all together stead of one after another. Because if one is a little bit behind, someone else may have developed the same idea ahead of you. So working on developing the product, branding, getting funded at the same time is crucial for a startup’s survival.

The appearance prototype can be used in the cases, for example, pitching to the investors how the product is going to look like, or used for photography and video purpose for a particular marketing and selling campaign, ie. trade show and crowdfunding campaign. While at this point the development of the product is not entirely complete it is still crucial to grasp any opportunities to raise funds, hence the Appearance prototype will help your customers grasp pretty much the whole idea of the product design and understand the function.

The Design Prototype is usually built with CNC Machining or Vacuum Casting techniques. For product enclosures that are in metal material, CNC machining is a common technique to use, as well as some plastic enclosures that require very delicate dimensional precision. The benefit of such method is that every part is programmed before machining hence the tolerance can be held with high precision. Also after the machining process, each part is to remove burrs by hands followed by the surface finish process. The downside is that the cost is relatively high per unit due to each unit is machined and dealt with individually at a time.

Another method, silicon molding, also known as urethane molding, vacuum casting, is a more cost-effective technique for plastic parts and enclosures. The simple explanation of the technique is that the first part/ design (master pattern ) would be machined, this part then becomes a master pattern for the rest of the parts. The silicon mold will be made according to the master pattern then once the mold is made, the rest of the parts can be produced from the mold with high temperature. The surface finish, through different method from mass production, can also be performed 90% as similar as the final product.

Production Prototype is the samples that are made exactly as how mass production will process. Take plastic enclosure as an example, a production prototype means that the sample is molded from the tool, the tooling has been made with designated finish requirement. When it comes to the metal material it could be from a die that is built for mass production purpose. Of course, there are also many other approaches to make the high volume production parts, for instance, the case of iPhone was made one by one with the high precision machining process.

Most startups we have worked with has a relatively smaller volume production scale, say 2,000-5,000 for the first batch. In this case, rapid tooling (soft tool) is a considerably cost-effective method as the tool is made from soft steel or aluminum that brings down the cost of the material in making the normal hard tool. Another way to see it is that some team may go through necessary changes in design after the first batch released to their users. At this point, they can feel freely to change the design and make a proper hard tool without feeling that they are wasting money in the first round.

If you have questions about prototyping or production before you launch your campaign, please contact us, and our team will send you some tailored tips and guidance.

We support The Great Bay Area startup ecosystem, whether you are a startup, designer, accelerator, incubator, advisor, investors or media,  welcome to get it touch!

Arrange a free call and find out how we can assist.

Shape Prototype is a hardware product studio based in Taiwan, with product manufacturing function located in Shenzhen, China. Our goal is to support hardware and IoT startups & SMEs worldwide by providing cost-effective solutions, shortening the manufacturing process, from prototyping, rapid tooling, and high volume production. Contact us today and discover a better way to achieve your manufacturing goal.